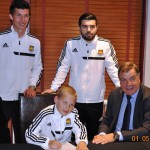 Jacob, who has been at our Pre-Academy Centre for the past six months had trials at Reading Academy and continued to work hard at his game, earning himself a six week trial with the Premiership club.

Have you got what it takes to make it pro? If so, we want to hear from you.